There are an unexpectedly large number of undefeated NFL teams left

Through 6 weeks of the NFL season, there are currently five (FIVE!?!?!) undefeated teams in the NFL: The Patriots, Bengals, Broncos, Panthers, and Packers.   This seems like a lot.

So, as suggested by someone on twitter, I ran a simulation to see how rare this was.  I actually ran 2 quick simulations, the first assuming that each game was a coin flip and the second using the point spread as an implied win probability.

Let’s assume that each game is a coin flip.  A winner and loser is chosen for each game using the actual schedule, and we count how many teams are undefeated after 6 weeks.  I simulated the first 6 weeks of the season 100000 times.  How often should we expect to see 5 undefeated teams if all games are a coin flip?  Basically never.

Using the point spreads for the first six weeks of the 2015 NFL season, implied win probabilities were calculated for each game.  Game were then simulated based on these implied probabilities from the point spread.  I only ran 10,000 simulations here, but the results are largely the same.  It’s very rare to see 5 undefeated teams.

Finally, here’s a table for the number of times each individual team was undefeated in 10,000 simulated seasons based on implied win probabilities based on the spread. 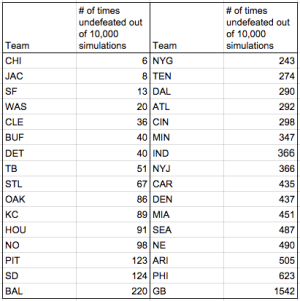 Posted on October 22, 2015, in Uncategorized. Bookmark the permalink. Leave a comment.