I’m using three search engines (Google, Bing, and Yahoo!) and two search terms for each candidate (Mitt Romney, Mitt Romney is, Barack Obama, Barack Obama is).  I’m then weighting the terms from 10 to 1 for Google and Yahoo and 8 to 1 for Bing (as they only return 8 search terms), based on the order they appear in the auto-completes.  For the first two word clouds, I’m additionally weighting the search engines with Google getting weight 11.7, Bing gets 2.7, and Yahoo gets 2.4.  (These numbers are approximately the number, in billions, of searches performed on each site respectively in February 2012.)

The first word cloud represents all of the words with weighting for both presidential candidates.  Kind of makes you think a little bit about the political discourse in this country when some of the tops words for presidential candidates are idiot, liar, and  antichrist.  (For those of you new to the internet, here is the explanation for “your new bicycle”.) 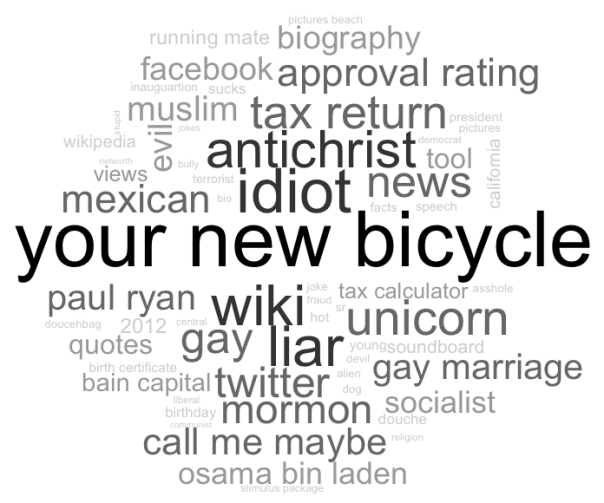 This next word cloud is the same as the previous one, except it is separated by candidate.  The blue and red words are Obama and Romney, respectively.  If you’re wondering about the “Unicorn” on the Romney side of the word cloud, you may be interested in this facebook page.  According to them, “There has never been a conclusive DNA test proving that Mitt Romney is not a unicorn. We have never seen him without his hair — hair that could be covering up a horn. No, we cannot prove it. But we cannot prove that it is not the case.”  Truer words have never been spoken….

The final wordcloud of the trio breaks down the auto-complete terms by search engine.  Note that, these words for this wordcloud are not weighted by search engine, but they are weighted by order within each search engine.  I think it’s kind of interesting that, for Yahoo, the big words are religions: Muslim and Mormon.  This makes me wonder if different search engines might predict in some way political affiliation, and, apparently, I’m not the only one who’s thought about this.  Looks like a group called Engage has already looked into this and their results are summarized nicely in this graphic.  According to them, Googlers tend to be more Democratic and Bingers (?) tend to be more Republican.  (I don’t see Yahoo on their graphic, which I find odd.)  Also, according to Alexa.com Bing users tend to be older than the average internet user, slightly more likely to have “some college” education, and slightly less likely to have a graduate degree.  Google and Yahoo users tend to be very much the average internet user with the exception that they are much less likely to be over the age of 65.

Below here, you’ll find screen shots of the Google, Yahoo, and Bing auto-completes if you’re interested in the raw data that I used. 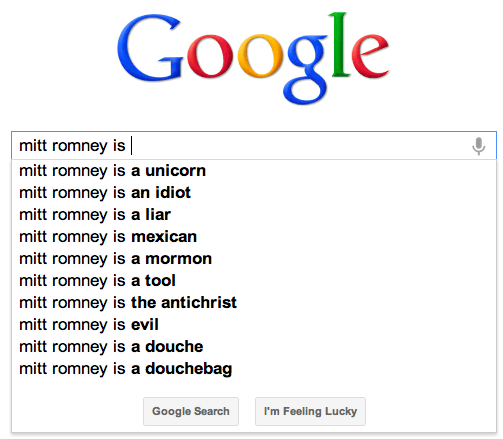 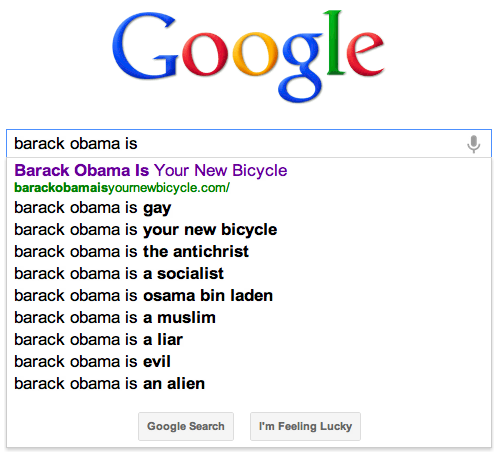