← Pretty pictures and election 2016
Chances of winning presidential election in terms of an NFL football game. →

Based on @predictit state electoral college markets, Clinton has about a 94.1% chance to win in November compared to a 5.6% chance for Trump (with a 0.3% chance of a tie).  Details of how I estimated these probabilities are here and the code is on github here.

Overall in the past week, there has been a small shift towards Trump.  Clinton hit a high of about 96.8% on August 18 and is down a few percentage points today to about 94.1%  This has been pretty steady since around August 9th when clinton jumped to over 90% and she’s been above that ever since.  This is good news for Clinton who, as recently as August 1st was in the low 80’s percentage wise to win the electoral college.  It will be interesting to see if Trump can make any sort of comeback at all or if Clinton will hold steady in the 93-97% range up until the election. 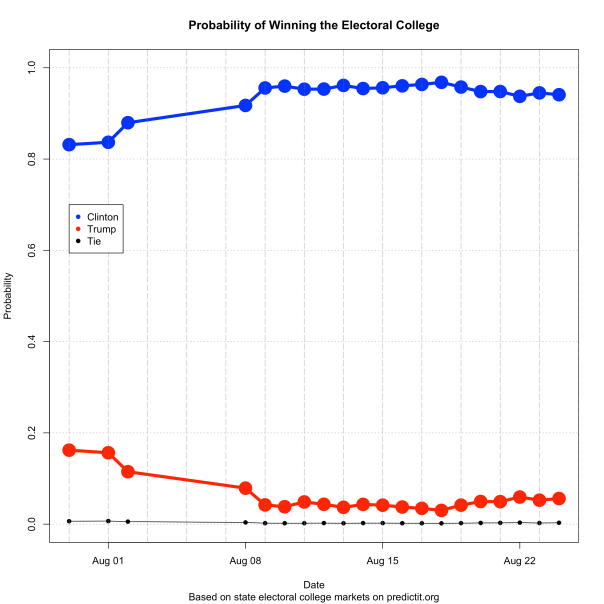 I’ve also looked at state polling information based on the Huffington Post’s collection of polls.  (You can get my scraping and plot building code here.)  You can see a few new states have been added since the last time including West Virginia and Massachusetts.  Not surprisingly, these are deep red and deep blue, respectively.  States with no polling data in the Huffington Post data set will not appear in this graph.  What I still find fascinating about this plot is how well third party candidates are doing in a few states.  States like Idaho, Utah, Texas, and Delaware seem very receptive to the idea of voting for a third party candidate like Gary Johnson.  It will be interesting to see if Johnson can somehow win a state like Idaho or Utah, which both have large Mormon populations and loathe both major candidates. 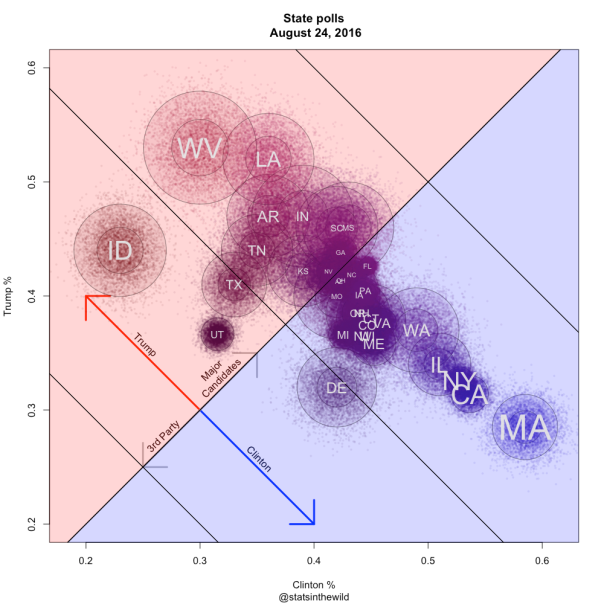 I’ve also put together a plot of national polling over time.  The top plot here follows the race from September 2015 to present whereas the bottom plot focuses on May 1, 2016 – present.  I’ve also indicated when some key events took place like debates, Super Tuesday, when each candidate got the clinching number of delegates, and their primaries.

You can see that before about May of this year, polling between Trump and Clinton was fairly sparse as they were still battling in their respective primaries.  After that though more Clinton vs Trump polls were taken and the margin of error for these polls drops considerably.  Both candidates continue to increase their polling numbers, but the gap between Clinton and Trump has been a pretty consistent 3-5% since right after the Democratic National Convention. 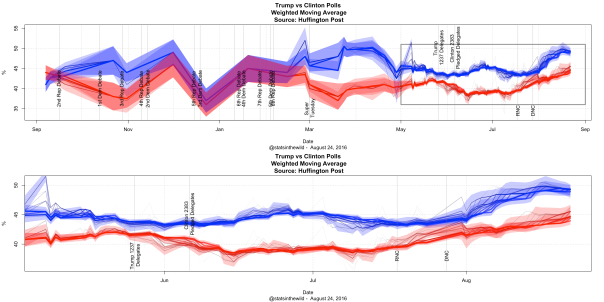 Finally, I made GIFs!  Here are the state polls over time.

And here is the electoral college distribution over time.

Posted on August 24, 2016, in Uncategorized. Bookmark the permalink. Leave a comment.

← Pretty pictures and election 2016
Chances of winning presidential election in terms of an NFL football game. →